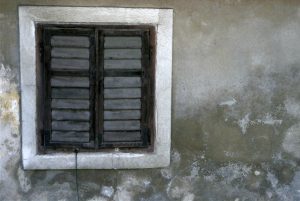 I laid on my belly and made my 9-year-old body as flat as possible.  Trying not to breath, I would only inhale and exhale very slowly causing as little movement as possible.  My heart was pounding out of my chest as it pressed against the cold flattened grass.  Turning my head silently toward the street, I only dared open my eyes to see if I gave away where I was.  Through the tall grass I could make out a figure but didn’t know how close he actually was.  I prayed my cold puffs of breath would not give him any clues. The corner lot was thick and overgrown with sharp branches, brambles and tall grass and I laid in the middle trying not to give away my spot.  I was hiding.  Hiding for my life.

It was a cold November day, as I was doing my paper route.  This important job had been passed down from my brothers, as they moved onto better things.  Everything got passed onto me, clothes, toys, bikes and eventually jobs.  I liked this job.  It was easy and fun, paying me enough for a visit to the candy store on collection day and saving a few dollars.   In my family, the kids had to earn money if they wanted anything. Looking back, I think that was a gift as it taught us responsibility.  Delivering papers in the neighborhood was one way teach that and I was good at it.

For 2 weeks leading up to my moments of survival, I noticed something was seriously wrong.  Me and my best friend would walk or bike around the neighborhood as we would do on a daily basis.   Except this one day we were walking down the steep hill toward the corner candy store and saw an unfamiliar beat-up van.  It was rusty with faded blue paint with a kind of whitewash that covered a sign or maybe a slogan on the side.  The van had passed us several times, slowing down so the driver could stare.  He glared at us in an intimidating way and would then continue on.  We both ignored it and said not a word to each other.

We would see the van in the following days and it escalated.  When he slowed down to stare, he also removed his penis from his pants and waved it around at us.  I was frightened and too young to understand what that meant.  I did know what he was doing was atrocious, but I had no idea why.  9-year-olds back then were not as savvy as the 9-year-olds today.  I didn’t know anything about sex or sexual predators.  We both looked at each other and finally acknowledged it.  “Did you see what I saw?” I asked.  She nodded her head slowly and stopped talking.   She was 2 years younger than me and if I had trouble understanding it, I’m sure she was clueless.

After a couple of weeks of this stalking, I was mentally overwhelmed and petrified of this guy.  He continued to follow me and take out his genitals.  I didn’t even have the insight to imagine something horrible could happen, but I knew he was dreadful.  I’m sure he knew where I lived and was aware of my paper route.  I didn’t have the guts to tell my parents, feeling sick over the situation.  Would they believe me?  Did I do something wrong?  My young brain was not mature or equipped to handle this.  I just wanted the whole thing to go away.

One afternoon, after school, I began my paper route.  I was walking alone and coming down a customer’s walkway when I spotted the van at the top of the hill slowly coming toward me.  I felt extreme panic set in.  My pulse quickened and I was disoriented.  The fear was now palpable.  I lived only a few doors down, so I ran to my house. Upon entering, I locked the door, crouched down, as to not be seen through the windows, and confessed to my mother that I was a target of this deranged person.  I gave no details, but she had to have seen how afraid I was.  Trying to catch my breath, I just started to cry.  Mom just sat beside me at her sewing machine and calmly said, “Say the Lord’s Prayer and you’ll be fine.” She said that there was nothing to worry about, and I should finish my paper route.  I wanted her to protect me, take care of me and that was all she said.  That was all she did.

I don’t know why I continued the paper route, or why I even left my house.  It was stupid in retrospect.  Afterall, how was a single prayer going to protect me?  I should have stayed put and said the hell with the paper route.  I knew that this monster was playing for keeps.  I was in danger.  So, being a good little Catholic trooper, I started reciting the prayer as I approached the next customer’s door, “Our Father who Art in Heaven…..”  I was shaking as I prayed, not paying attention to the words, but still hoping it would save me.  The coast seemed clear until I took a side street connecting two major roads.  Then looking ahead, I could see the van turning onto the street straight in front of me and I realized it was over.  He was going to hurt me.

Without any premeditated thought, I instinctively ran into an overgrown grassy corner lot.  It was my only chance to elude him.  I didn’t know if he saw me run in, but I could hear the van slow to a stop on the edge of the lot.  The next thing I heard was the thump of the van door closing and him walking along the street in my direction searching for any sign to find me.  This was a quiet short-cut street with little to no traffic this time of day.  I feared no one would save me.  However, before he entered the lot, another car pulled onto the sleepy tree lined street and slowly passed his van.   I peeked through the tall grass and saw him dart back to his van and peel away not wanting to be recognized by anyone.

I started to quietly sob laying on my stomach.  The relief was pouring out through my tears.  I didn’t want to move until I was sure he was gone.  His figure was burned into my head.  He was ominous and scary.  Twenty long minutes later, I slowly rose to my knees, gathered my papers, and walked out of the lot to finish my paper route.  I should have run home, screamed, cried, yelled for help but I didn’t.  I continued on because it was my responsibility and delivered to a couple of more houses without the van in sight.  However, as I delivered to the back door of the next neighbor, I saw the van returned as he stopped it at the end of my customer’s driveway.  There was no escape.

Mr. Warren was in his back yard and saw that I was shaken up as I placed his paper at the back door.  I started blurting out everything to him, except for the penis part.  He tried to calm me, but I broke down and was crying uncontrollably.   I implored him to help me.  Halfway through my plea I looked back to the street.  I stopped to catch my breath and saw that the man in the van was smiling at me.  I was so afraid he would get out of the van and try to hurt me.  It was then that Mr. Warren, who hadn’t been visible to the street, stepped into the driveway to see what I was looking at.  I pointed to the van and yelled, “that’s the man who has been following me.”  The van’s engine revved up, slammed into gear and sped away.  My father was called to pick me up.

Detectives came to my house a couple of nights later to question me about the incident.  I told them the whole truth.  My father sat with us and was enraged that the man had gotten away.  The police assured him that the guy would be caught.  I felt safe in my house with my father protecting me.  The detectives had arrived that night when Rudolph the Red Nose Reindeer was on TV.  It was my favorite holiday show that aired only once a year.  Missing the special would be tragic, as I’d have to wait forever to see it again.  I so wanted to be laying on the floor in my pajamas in the dimly lit living room with my brothers and sister.  Because their comforting protection has always meant the world to me.  Instead, I was busy answering grownup questions, important questions.

I learned a few weeks later that the man was caught.  I overheard my mother on the phone saying that I would not testify and relive the entire events again.  Oh my God!  I couldn’t believe it.  When I look back, I realize this was a huge mistake on her part.  A sexual predator would be set free because I didn’t have a chance to help get him off the streets.  I’m sure she had her reasons, however in my opinion, she was fatally wrong.  It was adding insult to injury.  First, she didn’t protect me when I told her I was being followed, then she wouldn’t help protect others who might be stalked, threatened or killed.

I have finally come to terms with what happened and have forgiveness in my heart.  I trusted my mother, and she trusted God.  It was her way of dealing with the situation.  It was 1973, and these things didn’t happen in suburbia, or so we thought.  I’ll never know what saved me that day. Could it have been prayer or quick instincts? I’ll never really know for sure.  I do, however, know that I am strong and resilient, a survivor.  If this happened to my kids, I would protect them with my whole being, coming down on a pedophile with such rath that they would suffer like you cannot even imagine.
I promise.