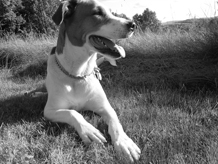 Until the Wind Meets the Sun

As many of you are aware, my dog has dementia.  Yes, you heard that correctly. Dogs get dementia just like people do, at least that’s what the vet said.  I realize there is a bit of a giggle factor when I say this.  People have asked, “how does the vet know he has dementia.”  All I know is his behavior showed up on her checklist; staring at the wall, barking for no reason, confusion.  He had them all, especially the barking.  We were given medication to make him comfortable and help reduce the symptoms.  So far the barking has lessened, but my concerns have grown.

You see, he doesn’t have years to live, he has months.  I’m not prepared to let go.  At 13 years old, Scout is on the other side of the mountain.  Sleeping and eating have become his main activities – no more toys, no more running. The tennis ball he used to fetch sits in a basket, caked with dirt and memories. I don’t have the heart to throw it out.  I reflect on the puppy years as I look at the ball, wondering how his muzzle got so grey.  Thinking about how many times I would throw the ball into the lake and with labored breath, he would paddle back with the ball in his mouth, excited for the next throw.  He couldn’t wait.  And, a branch was like candy to him whether it was thrown, or he just picked it up in the yard.  It was his treasure, as he pranced around showing it off.

He was a crazed puppy who joyed in the destruction of clothing and furniture.  Not to mention that he took 6 months to become house-broken.  Every time I turned around he would be gnawing on a coffee table, or come trotting out from a bedroom with underwear in his mouth.  And, if you didn’t walk him, when he wanted to walk, the destruction escalated to pillows and couches.  He was the worst puppy.  I was terrible at disciplining Scout, but Jamie played “Bad Cop” to improve his horrible behavior.  It worked over time, as we stuck by him as he grew into a steady old dog, and a great friend.

Since we got Scout at 4 months old, he has always enjoyed boat rides.  That will never change.  We have to lift him onto the seat just like we do in the car now.  Sitting up in a regal pose, he points his nose to the air to smell neighborhood cookouts, or other scents we could not imagine.  His eyes close, like he is infused with the delight of it all.  The wind his muse, the sun his lover. The two are one in the same to him.  We are there to complete the meeting, and keep him company.  He sits in the seat, or moves to the floor to adjust his outlook allowing him to catch scraps of food that fall off our plates.  We gladly share with him.  Each voyage is one of relaxation feeling the simple pleasure of being in a loving family.

Scout lays at my feet while I type, just happy to be next to me.  He will always be my baby-puppy no matter how old he is, or how confused he now gets.  He has been with us since he was a few months old, but it feels more like a lifetime.  He has worn his loyalty over the years, sitting next to me when I lay crying on the couch, or jumping on me when I got home from work.  Our emotional lives are intertwined, and for that I am thankful.  People who lack a special kind of commitment don’t deserve the love of a dog.  For the gifts that dogs will bring you, can leave you vulnerable, exposing your heart in unimaginable ways.  I am happily exposed.

Scout follows me from room to room, ending up under my desk where I work.  A hound needs to be touching, and will often put his paw on my foot, letting me know he is there.  I take a break from typing, reaching down to soothe him with my words, while giving him with a few scratches  He looks at me with his hound dog expression and chocolaty eyes; that tell me, “I’m still here, I remember you, and now it’s time to eat.”

His wish is my command, until the wind meets the sun, and he will be a whisper in my ear for the rest of my life.