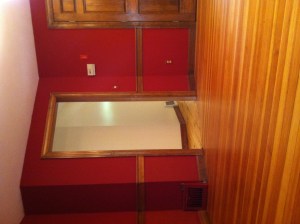 I once read that the average person lives in 8 homes in their lifetime.  As I started counting my many dwellings on my fingers, memories of each seeped into my thoughts.  This was the place I lived when my son was born.  That was the place I lived where my roommate’s ex-husband blew up her car.  This was the place I lived when I worked at Digital, and so on.  Nearing the end of my list I slowed down to reminisce about my favorite place, number seven.  A 100-year-old farmhouse in the center of town, a charming New England farmhouse, white of course with black shutters.  It had a small, but comfortable, front porch and a large, attached barn that was almost as big as the house.  Sitting on a quarter acre, it featured a small inviting front yard and a low stone wall lining the driveway with large Hosta adjacent. The front garden and landscape details were impressive, as was the interior that had much more to consider.

After touring the place with a realtor, I knew this was my house.  The crown molding and gourmet kitchen added exquisite detail that was intimate and understated.  The formal dining room had big windows and great light, not to mention the deep rich hardwood floors.  The backyard deck introduced you to a far-reaching fenced in lawn surrounded my mature maple trees. It was very private.  I could see myself having morning coffee on the deck and preparing fantastic meals for my family, fit for a kitchen like this.  I felt an overwhelming sense of contentment as I walked through each room.  The house had great vibes.

I moved in months after the offer was accepted, due to septic issues and red tape.  It was such a long wait that I was starting to feel sorry for myself, a bit disappointed.  However, moving day finally came and I couldn’t wait to start this anticipated chapter.  I was now living on Lancaster in the Historic District at the foot of the hill that led to “Mecca.”  Everything was within walking distance, schools, stores, town hall and common, library and my work.  This would be awesome for my son.  It was the center of the universe I thought.  My journey had started.

Like any new house you try to put your mark on it.  Change things up a bit.  I removed some wallpaper, painted rooms and upgraded cabinet hardware.  My 8-year-old got settled into his digs and had all his things about him.  The barn was getting crowded with boxes and junk, as barns usually do.  I didn’t have enough utensils or gadgets to fill all the cabinets in the vast kitchen or enough furniture to fill the rooms.  I did, however, have the intense desire to make it my own.  There was plenty of time to fill it up.

We were slowly unpacking and settling in when a couple of odd things happened.  First, I could hear knocking and running around in the upstairs rooms.  It appeared that squirrels had set up a homebase in my thin walls and attic.  I was disgusted.  An exterminator said they could put out traps, which over time didn’t help.  And my son told me one morning at breakfast that he saw an old man standing at the end of his bed last night, just looking at him.  I asked, “What did he look like?”  He replied, “You know, old like Papa.”  I said, “What did you do when you saw him?”  “I rolled over and just went back to sleep” he answered.  He wasn’t shaken at all.  I, however, was a little creeped out.  So now I had two somewhat irritating issues, horrific vermin and an old man ghost.

Then came the rain. The bones of this old homestead could not withstand more than a drizzle.  The stone foundation was like a sieve allowing water to fill the entire dirt floor creating a muddy wading pool.  We eventually got a sump pump to alleviate the problem, although it always remained damp. Upstairs, the rain caused a foggy condensation on a skylight in my bathroom.  Just something else to replace.  Once, we had to seek shelter during a tornado warning and ended up going down to the basement, only to stand in knee high water with a weak flashlight.  I would have preferred the tornado.

Holidays were warm and cozy mainly because my heater had to be replaced less than a year after I moved in, and the office addition and downstairs bathroom used absorbingly expensive electric heat.  I had no idea how much that heat cost until I choked on the first bill.  I ended up closing the office and bathroom for the winter, but then had to worry about pipes bursting.  And of course, the pipes did burst. Those annoying things aside, it was a place made for entertaining.  We could fit 50-60 people for gatherings and had ample room for overnight guests.  It was fun to buy décor and antiques keeping with the engaging character.  Mostly though, I loved having a glass of wine as I sat on a warm summer evening listening to the Band Concert at the gazebo on the town common.  It was magical.

Overall, it was all the great memories that made this place so special.  I was truly blessed to have God or fate bring me there.  It was like a vessel that contained my happiest times.  I raised my son, got divorced, had breakups, reconciliations, graduations, holidays, and birthdays.  The ghost occurrences continued to happen, the squirrels were never evicted, the rain brought stress and there were always perpetual repairs to do. However, I don’t regret buying it for one second.

I’m now living in a small comfortable lake house in the same town.  It is where I will lead my next chapter with my partner.  We will grow old here.  The backyard is a watery paradise that brings me serenity and wonder.  It is spectacular.  I often drive by house number seven, Lancaster, and think about how much I loved it.  The place has had suttle transformations that catch the eye.  The landscaping has been meticulously upgraded and the front door is painted a different color.  It looks like the new owners are making it their own.  I am extremely content where I rest my head now.  There won’t be any other homes for me in the future.   I am officially the “average person” living my life out in house number eight.