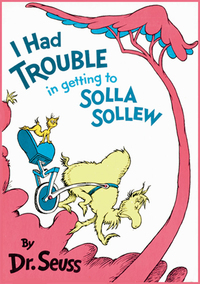 “I had trouble in getting to Solla Sollew
Where they never have problems
at least very few.

… leave Solla Sollew for the city of Boola Boo Ball, on the
banks of the beautiful river Woo-Wall, and known to never
have troubles “No troubles at all!!”

But I’ve bought a big bat. I’m all ready, you see.
Now my troubles are going to have troubles with me!“.
Dr. Seuss

I used to read this book to my kids and it became one of my all-time favorites   🙂
If you haven’t read this book, I HIGHLY recommend it.  Visit your local library today.